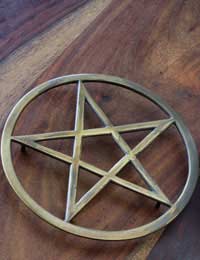 Wicca is a form of spiritual practice popularised by Gerald Gardner in the 1950’s. It is unclear as to its origins before that as it has been based on so many pre and post Christian spiritual practices that may loosely be termed under the name ‘Witchcraft’. Wiccans argue that their spiritual practice is authentic, positive and effective and that it was stamped out by Christians who feared any spiritual opposition as they spread their doctrine through Europe and the world. Wicca therefore is arguably a return to ones spiritual roots. There are many different versions of Wicca since Gardner proclaimed his adherence to the faith in the mid- Twentieth Century.

Some branches of Wicca teach that members need to be initiated and preach secrecy amongst followers. Others, however, feel that Wicca can be transmitted without any following of a central principle, and that rituals can be tailored to the individual. All Wiccans hold nature in high regard and aim to harness through spells the power of nature.

All Wiccans teach clarity of mind and relaxation as central to the effectiveness of their magic rituals. Meditation may take place prior to a ritual in order to prepare the mind for spell casting, or make take place regularly in order to foster the awareness needed to practice the Wiccan belief that nature is due fundamental respect.

Wiccan meditation starts, as with all forms of meditation, with the clearing of the mind, either by focusing upon a mantra or by counting breaths.

Following this much Wiccan meditation focuses on the pentagram, or five pointed star, where there is a single point at the top, two at the bottom and one on each side. Many people believe this symbol to have some strange occult link, but that is all ‘hocus pocus’ – there is nothing evil or crooked about this symbol, and it is fact used in positive ceremonies by Wiccans everywhere! The aim is to visualise a pentagram or to look at one, and to place particular emphases on each point of the pentagram one at a time.

One meditation suggests that you feel yourself at the top point of the pentagram, and meditate on your connectedness to the four elements represented by the other four points of the pentagram: Water, Air, Fire and Earth. Whilst meditating it is believed that you will receive some spiritual truth, or an answer to a question – should you have posed one as the basis of your meditation.

Wiccan essentially offers a religion to people who may feel uncomfortable with the highly organised nature of the main religion, and therefore can provide a framework for those who wish to meditate around spiritual concerns. It is particularly popular among those concerned with the environment as it is very oriented around mans intrinsic connection to the four elements that comprise nature.

It may also appeal to those looking for an authentic Celtic religion, or looking to a practice a faith which is not bound up with the Imperial quests that characterise the spread of some World Religions.