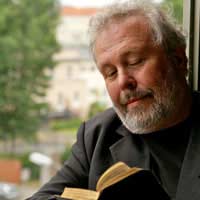 Promoters of meditation within Christianity point to a biblical directive urging that followers of God meditate upon the Bible regularly:

'This book of the law shall not depart out of thy mouth; but thou shall meditate therein day and night…' Joshua Chapter 1, Verse 8.

Much in the way of Christian meditation takes this prescribed form, focusing on a contemplative reading of the Bible, a practice which has been central to monastic life since at least the 4th century B.C. Termed the 'lectio divina' the slow and focused reading of Biblical passages would often culminate in first asking for God's help in receiving the wisdom of the Bible, and in later entering into deep and unstructured meditative prayer.

In this way Christian meditation focuses on a desire to understand the scriptures and to be close to God - or to understand his true nature. Today, this form of meditation is not common amongst the Christian lay community as such. However, prayer, and the saying of the Rosary are forms of meditation in themselves and can help to focus the mind in much the same way as meditation involving mantras. The Rosary involves the contemplation of divine mysteries, along with the repetition of the 'Hail Mary' prayer. As a spiritual discipline it is widespread amongst Catholics, many of whom recite the rosary daily, whilst others recite it on specific holy days and is reflective of the use of 'Mala' or prayer beads by both Hindu's and Buddhists. This practice is thought to derive from the use of a prayer rope to count repetitions of the Jesus Prayer: 'Lord Jesus Christ, son of God, have mercy on me, a sinner,' by 4th Century Christian hermits. The repetition of the Jesus prayer is still a popular form of worship amongst Orthodox Christians and is one aspect of 'Hesychasm' - the Eastern Orthodox practice of intense and reclusive worship.

Hesychasm is strikingly similar to Eastern forms of meditation, not least of all in its attempt to recite prayer 'with the mind in the heart'. This descent of the mind to the heart is intended both as a physical reality and as a metaphor for the overcoming of the clash between logical and emotional urges. It is also, in a sense, reflective of Yogic practices which envisage shifts of energy through the Chakra's (specific focal points arranged between the crown and the pelvis), two of which are placed in the head and around the heart. The aim of the hesychast is to reach a true knowledge of the nature of God, just as the aim of the Buddhist is to attain an accurate sense of the interconnectedness of all things.

The Cloud of Unknowing

The Cloud of Unknowing is a 14th century text written by an anonymous English monk. Much like Zen Buddhism it points to the fact that to really know the nature of God is to come to an appreciation of the fact that we can never really know it! God, as an all knowing, immortal and omnipresent being can never be fully understood by us, mere mortals with limited knowledge. In this case, in order to come to a closeness with God one must embrace their not knowing or 'unknowing', seeking to form a relationship with God based on love, which is an experiential phenomena and not knowledge based.

In its many forms, Christian meditation attempts at a closeness with God, although it is often emphasis by Christian elders that this experience is no substitute for union with god, through the love of Christ, which is attained through Holy Communion. The dogmatic nature of this approach has led to many schisms within the Church, not least between the Eastern Orthodox Church and the Catholic Church, and the Protestant and Catholic Churches.

Despite worries that meditation is void of any relationship with Jesus, the Christian saviour, it is rising in popularity lately, with many people advocating the recital of prayer lines as mantra's, or the simple repetition of one chosen sacred word - as with the 'Centering Prayer', devised in the 1970's. Meditation clearly has a place at the heart of Christian practice, and is therefore as valid spiritually in the traditionally Christian West as it is in the East.