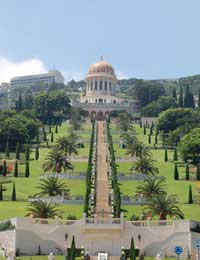 Members of the Bahá'í Faith consider religion to be constantly evolving with new revelations being taught by successive prophets - of which Siddhartha Gautama, Moses, Jesus and Mohammed are just a few examples - throughout history. Members of the Bahá'í Faith follow the teachings of Bahá'u'lláh (1815-1892), who they believe to be the latest in a line of spiritual leaders, fulfilling the messianic prophecies of the major world religions.

Bahá'í doctrine teaches the existence of an all powerful God, who’s essence is ultimately unknowable to man. They also teach that humanity is unified, as is God, who is the creator of all things. Additionally they believe that all religious and spiritual endeavour is unified and that further truth’s will be progressively revealed over time. They do not believe that Bahá'u'lláh is the final and supreme prophet, but merely that he is the last in a line, and that there will not be another for a least one thousand years.

The Bahá'í Faith has it’s roots in Sufi Islam and believes that each individual has a divine soul and that by accessing this soul, they can realise the true nature of their relationship with God. Bahá'u'lláh’s and his successor, his son `Abdu'l-Bahá, have both taught that meditation can be useful in realising the nature of the divine, urging that it practiced alongside fasting and prayer. Bahá'u'lláh himself is adamant of the value of daily worship, believing that it is not enough for one to merely understand the scriptures, but that one must also directly experience a relationship with God through prayer and meditation. In a similar way, even a contemporary secular practitioner of meditation will surely only benefit from a regular practical experience of relaxation techniques rather than by merely appreciating the principles that underlay them. In this sense discipline, though not an especially harsh form of it, is central to wellbeing.

However, no particular form of meditation is prescribed by the Bahá'í Faith other than a morning and evening contemplation of the scriptures. Additionally, prayer must be said at least once daily. These ‘laws’ are not intended to be restrictive, but rather to aid one’s spiritual development.

Some forms of prayer practiced by followers of the Bahá'í Faith resemble closely meditation in their semblance to the chanting of mantra’s. This undoubtedly arises from The Bahá'í Faith’s rootedness in Sufi Islam, which itself has strong parallels with the meditation practices of Eastern religions such as Hinduism and Buddhism.

The Bahá'í Faith is particularly suited to contemplative meditation for its emphasis on the unity of all religion. To meditate upon such a notion can bring us closer to an understanding of spirituality as it really should be - devoid of any intensive injunctions or rituals. A consideration of the similarities of all world religion in this way can make a valuable contribution to better understanding all of the world faiths, and one’s place within them.