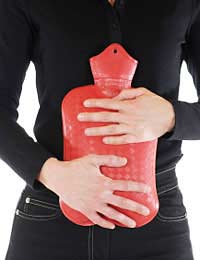 Like much of the female population, Suzanne suffered from Pre-Menstrual Syndrome – and she suffered badly. In the 2 weeks leading up to her period, she suffered a series of symptoms – everything from terrible bloating and feeling constantly exhausted to aching joins and muscles. She also struggled with mood swings, often leading to intense emotional outbursts which shocked and upset her friends, colleagues and family and embarrassed her when she remembered them afterwards.

“It really was like hell on earth,” confides Suzanne. “I mean, it was like I just changed from this capable, reasonable, sensible career woman and wife to some kind of raging, hysterical demon! I would cry at the drop of a hat or lose my temper and shout at people for no reason - and then feel really embarrassed and guilty afterwards. It was horrible.”

Suzanne had tried all the usual herbal supplements and conventional medicines that were safe to take with little effect and she was really at her wits end. Then while attending a friend’s housewarming party, she met Emily, who confessed that she also used to suffer from terrible PMS. However, Emily had found a solution.

“She told me she used meditation to help her!” Says Suzanne. “I have to admit, my first reaction was that she was some kind of loony. I mean, I’m pretty sceptical about these kinds of ‘alternative therapy’ kind of things. The thought that doing some chanting or heavy breathing might help my PMS just made me want to laugh.”

But as Emily told her more, Suzanne slowly became intrigued. For example, she learnt that in one study on women with severe PMS, they showed a 58% improvement after meditating daily for 5 months. Furthermore, she learnt that meditating didn’t have to take a “spiritual” form, if she didn’t want it to – nor did it have to follow any particular religious doctrine.

“I always thought you had to be Buddhist or believe in those kinds of Eastern principles if you wanted to meditate. It was a real relief to hear that meditating didn’t have to be connected to those things, as I am not religious at all!” Declares Suzanne. “Emily explained that meditating worked because it sort of teaches you to focus on the moment – and this helps you to learn ‘acceptance’ of things, which then helps your PMS symptoms. I know it sounds a bit odd but I understood where she was coming from. I was always getting really upset and thinking, ‘Why me?’ and feeling really resentful or feeling really guilty that I couldn’t control my own emotions…well, Emily said she was the same but meditating helped her to let go of those feelings.”

In fact, current research suggests that meditating encourages an optimistic and positive approach to life and optimistic thoughts, in turn, help women suffering from PMS to put things in perspective. This means that they learn not to just focus on the “bad times” but also to recognise and enjoy the many weeks in their lives when they are not affected by PMS and see that PMS is just one aspect of their lives.

“Of course, the act of meditating also helps to relieve stress,” adds Suzanne. “And you know, basically, a lot of PMS symptoms are related to stress so when you learn to control stress better, it sort of has a positive effect on your PMS.”

“I have to admit, although I was interested, I didn’t really believe everything Emily was saying until I went home and tried it for myself. I did what she said – just a simple meditation technique, nothing fancy – you know, just relaxing and closing your eye and emptying your mind and focusing on your breaths, inwards and outwards. Well, I was really surprised to find that within a week, I was feeling better in general – just sort of generally more relaxed and less irritable.”

Of course, the real test came in a few weeks time when Suzanne’s next period was due and she was pleasantly surprised to find that her PMS did seem to better – or rather, she was able to deal with her symptoms better and therefore, they didn’t seem to affect her so much. Since then, Suzanne has been meditating regularly and has found that it has helped her enormously in coping with her PMS. Now those dreaded 2 weeks are more of a slight nuisance than the huge nightmare they were previously and Suzanne is delighted that she’s found a simple, drug-free solution to her problem.