Home > Reader Stories > How I Found My Mantra: Case Study 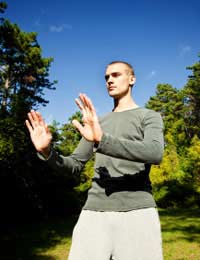 Eleanor had long wanted to take up meditation and had obtained several books on the practice, as well as attended a few meditation workshops. She had been worried that she would struggle to learn how to meditate – that maybe she wouldn’t be able to quieten her mind or follow the breathing techniques. So she was pleasantly surprised to find the actual process of meditating much easier than she expected and quickly grew to enjoy sinking into the state of inner calm, where her mind was completely free of distracting thoughts and she was completely “self-aware”.

However, there was one area she really struggled with and that was finding her own meditation mantra.

“The meditation workshops I’d gone to kept telling us how important and helpful it was to have a mantra to chant or even think internally during meditation. The mantra gives the mind a focus point; the repeated words or phrases act as objects of meditation, so that you can really clear your mind and free it from the concerns of your everyday life,” explains Eleanor.

“Traditionally you were given some kind of spiritual word or phrase – or even the name of some gods – which have a spiritual significance for you. The most common phrase that westerners recognise is ‘Om’ or ‘Aum’ and this is what was suggested to us at the meditation workshops. The only problem was, every time I tried to say it, I would get the giggles!” says Eleanor, laughing again at the memory.

The trouble with “Om”

Eleanor knew – from the workshop – that far from being a comical parody as it is often seen in modern media – the phrase “Om” actually has deep spiritual significance. For example, the symbolic form of “Om” – designated by three curved lines joined together, an upturned curve and a dot – represents the conscious, unconscious and dream states of the human mind. Furthermore, the actual sound of the phrase itself is believed to produce a primordial vibration originating in your stomach which is naturally symbolic in many different cultures.

“But I still couldn’t help feeling silly when I said it!” Says Eleanor. “I think I’d just watched too many cartoons or silly movies which had made fun of that phrase and I just couldn’t take it seriously anymore.”

Eleanor tried turning to some other meditating friends for inspiration but found little help there. “A lot of them used ‘Om’ and didn’t have a problem with it. One friend preferred the Hare Krishna mantra – you know, ‘Hare Krishna Rama’ but I didn’t fancy that either.”

Finally, Eleanor came across a book about meditation which addressed the subject of mantras and was relieved to read that there was nothing wrong with choosing your own mantra, even one that did not bear any resemblance to the ‘traditional’ mantras.

“The book said that I could choose any word or names which evoked feelings of peace and one-ness,” says Eleanor. “It didn’t matter if it wasn’t related to any of the traditional meditation schools or philosophies – as long as it was spiritually significant to me. That was the most important thing.”

Eleanor was also relieved to read that she did not have to chant her mantra out loud – that it can be just as effective whispered or even silently repeated in one’s head.

“Not having to say it out loud made me feel less silly, whatever phrase I used!” Laughs Eleanor. “After that, it was quite easy. I decided on the name of seaside town we always went to on holiday when I was a child. I had really happy times there and the memory of the sea and the wind in my face there always took me instantly to a place of calm and contentment. So repeating that name really helped me to focus and clear my mind during meditation.”