The History of Meditation 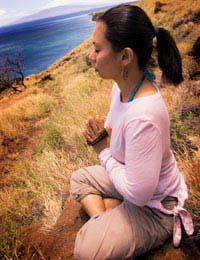 Meditation as a spiritual practice is not traceable to any one point in time and may precede all of the world religions, with some yogic disciplines claiming to be older than Hinduism, the oldest of the five major religions. It has in recent years gained a rising popularity in the west as disenchantment with organised religious practice grows, particularly amongst the traditionally Christian population. This revival tends to focus upon the Eastern routes of meditation (beginning with Yoga and Hinduism and extending to Buddhism and Zen Buddhism) although all the major religions have a tradition of meditation.

'Meditation' as a word is fairly loosely applied to a number of practices and is often taken to imply concerted thought upon a subject, often philosophical in nature. However, it is most commonly applied to the practice of clearing one's mind and by focusing on breathing, mantra's or spiritual questions, incidences and figures (such as the nature of God, the lives of the Saints and the image of the Buddha). This practice is in all probability as old as mythic thought and magic ritual - statues made to the 'Sun' god, for example, being a focal point for the attentions of polytheistic 'pagans'. In the 21st century many forms of meditation exist alongside one another, with secular interest groups (such as psychologists) championing its use as part of a healthy lifestyle, attesting to it being an integral part of human activity in any epoch.

The Beginnings of Meditation

Tracing meditation to its beginning is like tracing the controlled use of fire to its beginning: In all probability the controlled use of fire emerged in many different places at approximately the same time, being instinctual and intrinsic to human development. It is speculated, in fact, that meditation may have been stumbled upon by early men falling into a state of relaxation by staring for long periods of time into the flames of man made fires. It is similarly argued that the experience of spending time in dark caves could lead the mind to enter a trance like state - accounting for the profusion of simple abstract symbols drawn on cave walls in the paleolithic period.

The Development of Meditation

The structured practice of meditation is thought to go back 5'000 years with its development in India, culminating in its initial development by Hindus as a means of discerning the true nature of Brahman (or God) and its later development by the Buddha (Siddhartha Guatama) who reached 'enlightenment' by meditating under a Bodhi Tree, following years of disenchantment with established religious practices. The major break between Buddhism and Hinduism occurred as Buddha's followers do not believe meditation to be a means of getting closer to an understanding of a higher being (God), but rather as a means of realising one's interconnectedness with all things.

In Judaism 'Hidbodeidut' is a from of meditation that focuses on intense analytical study of the scriptures as a means of better understanding the nature of God. Kabbalah, a form of Judaism attempts to bridge the logical practice of Judaism with a more subconscious 'reflective' element, whilst emphasising that other forms of meditation, which avoid logical thought can induce trance like experiences that are mistaken for spiritual awareness, whilst being merely false apperceptions.

Christianity, over two thousand years old, has several practices that are similar to both Eastern forms of meditation and to Jewish meditation. Whilst the study of the scriptures is central to Christianity, prayer, the saying of the rosary, the sacraments of the cross and the practice of confession can all be likened to other forms of meditation. Eastern Orthodox Christianity has practiced a form of meditation called hesychasm since early medieval times, involving the clearing of one's mind and the repetition of the phrase: "Lord Jesus Christ, son of God, have mercy on me, a sinner."

In Islam prayer or 'Salat' is performed five times a day as a focusing upon the true nature of Allah (God). Sufism - a form of Islam practices meditation, dance and the playing of music as a means of getting closer to Allah, a form of divine unity that cannot be discerned through rational thought. In this respect Sufism is compared to Zen Buddhism (originating in the 5th Century), which attempts to attain enlightenment through the break down of falsifying rational constructs.

In Zen this accords with unusual sties such as the countless times that the Zen students question 'What is the nature of Enlightenment?' has been met by answers as absurd as 'Woof', or by simple whack round the head by a Zen master. Meditation is seen by Zen Buddhists as means of accessing true nature of being by living in the moment (hence the exclusion of thought). The seemingly absurd is another way of experiencing the moment without reflection. Meditation is not necessarily to be taken as an entirely serious pursuit!

Sikhism, the last of the major world religions to be formed (in the 16th century - Buddhism is not strictly considered a religion) has a tradition of reciting the name of God (Nam) over and over, which is similar to the Hindu recital of Om (the essence of all things, the universe).

By comparing religious practice throughout history it can be seen that religions formed thousands of years apart emphasise the same principles of meditation. Similarly, the contemporary meditation techniques prescribed by doctors for the treatment of anxiety, depression, cardio vascular problems and many other ailments are based upon the same founding principles - stillness of mind, clear breathing and focused repetition. Although secular forms of meditation are widely practiced in western society in the 21st century, spiritual meditation still flourishes alongside it: The benefits, if not the ultimate endgame - clarity, focus of mind and a sense of wellbeing are in both cases the same!