Why Meditate - The Spiritual Case 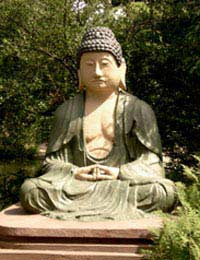 Meditation has many benefits for physical, mental and spiritual wellbeing. As meditating affects the quality of your breathing, and breathing is essential to healthy living, there is no one who could not benefit from meditation on a physical level. Mental health can too be strengthened with meditation, which helps to unclutter the mind and relieve stress - a condition that can lead to deepening mental health problems if not approached properly.

Finally, spiritual wellbeing can be served by meditation, and, whilst this may jar with atheists, it must be noted that 'spirit' can be taken to mean the essence of a person, or there fundamental personality - therefore being a complete person is dependent on a 'spiritual' wellbeing of sorts, however perceived.

The physical and mental benefits of meditation are covered in related article: Why Meditate? For now we will focus upon the spiritual case for meditation, whilst presenting it in a manner that may appeal to the non spiritual practitioner.

Western Science and Philosophy has tried, throughout its history, to come to terms with the existence of the inner (individual thought processes) and the outer (objects outside the individual). In doing this, western thought tends to try to dominate and categorise objects under scientific groupings that are perhaps inadequate to really bridge the gap between inner and outer. This leaves a massive gap of understanding for the westerner, often having to come to terms with their finiteness in a world and universe of bewildering size, with many present dangers. These western systems of thought are dualistic - they see a 'dual' differentiation between inner and outer.

Eastern forms of meditation attempt to approach the notion of 'inner' and 'outer' from a different perspective. According to both Hindu and Buddhist principles, all beings and objects are interconnected - a point attested to now, thousands of years after the dawn of eastern mysticism - by modern physics.

The process of meditation sets about to bring the individual to a fleeting or lasting realisation of the interconnectedness of all things by the gradual (or in Zen Buddhism, the sudden) dismantling of the distinctions between inner and outer. As the meditating individual lets go of day to day thoughts, which concrete their feeling of being separate from other beings they become one with all things, thus attesting to our immortality, as we truly exist as part of an eternal omnipotent being.

As Buddhism is not a dualistic system it does not conceive of a moral schema as such. Buddhism, rather, points to the fact that if all things are interconnected, it would be senseless to harm other people or beings - you would only really be harming yourself; this is the true meaning of 'Karma' - the idea that 'what comes around goes around'.

The Buddhist principle that we are all part of an eternal being also erodes the need for humans to strive for material gain and dominance over one another in this life. The security in being able to confidently address the issue of mortality in this sense makes for a better world.

Arguably, all major spiritual forms point to these fundamental realities in some form or another. Sects such as Kabbalah in Judaism, Mysticism in Christianity and Eastern Orthodox Christianity, and Sufism in Islam are all forms of their respective religions which are non-dualistic and emphasise our fundamental connectedness with God, as the source of all things.

The spiritual case for meditation, which makes our connectedness apparent to individual experience need not be written off as 'hocus-pocus', its claims being as valid an approach to the 'inner' and the 'outer' as the western approach, and is ,arguably, morally, a much sounder approach than western dualism, which naturally creates conflict between differing notions of right and wrong.