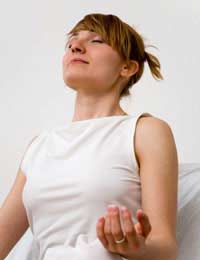 A mantra is a word or poem repeated as a form of devotion during meditation. Traditionally mantras are used by Hindus and Buddhists as a means to focus the mind and attain a form of spiritual Enlightenment or realisation. Many people use traditional mantras the most well known of which is ‘Om’ or ‘Aum’ a syllable and symbol that holds deep significance for practitioners of the Hindu faith. Due to traditional mantras being generally written and pronounced in Sanskrit, a language which many Westerners are not familiar with, many people prefer to conceive of their own mantras. However, as many Sanskrit mantras have a particular spiritual significance, it is really is a mater of choice over whether you choose to use a traditional mantra or one of your own.

The main thing about mantras is their usefulness in helping one to reach a state of calm, or a better understanding of spirituality. The repetition of a mantra that either has a spiritual significance linked to a sacred text or has a personal significance allows the individual to consistently explore and reflect upon spirituality on a subconscious level. At the same time, deep focus upon a single phrase helps to clear the mind, restoring to a state that is free from the physical and time-bound concerns of our everyday life. In this way, the repetition of a mantra links the individual, free from their physicality to all other things and beings and, hence, for many spiritual believers, to God.

Mantra’s such as ‘Om’ have a deep spiritual significance, whether written repeatedly, chanted out loud, whispered, or repeated in one’s head. The form of ’Om’ itself is represented by three curved lines joined together, an upturned curve and a dot. It is representative of the conscious, unconscious and dream states of the human mind as well symbolising creation and the nature of ’Brahma’, the Hindu creator-God.

The sound of the syllable itself, is said to be significant, effecting a primordial vibration that rises from the belly with the pronunciation of ‘A’, rising through the body with ‘U’ and finishing with the closure of one’s mouth on the ‘M’. Om is believed to be a natural syllabic sound common to persons from all cultures and for this reason has universal spiritual significance. In this sense it is easy to relate to as it is not merely a translation of the Judaeo-Christian concept of God, but rather it is a primordial sound common to all beings that links one directly to the source of the universe.

‘Om’ begins many Hindu mantras and is also used by Buddhists and New Age Spiritualists. The Buddhist mantra ‘Om Mani Padme Hum’ is one example of a mantra for which ‘Om’ is the root syllable. Mantras such as this are difficult to trace with regard to their exact provenance or meaning and their main benefit to a Westerner wishing to start meditating is possibly the ease of their pronunciation and the spiritual associations which they evoke. Other spiritual mantra’s one may wish to use include the ’Jesus Prayer’ (see related article on Christianity) and the Hare Krishna mantra - the tuneful repetition of the words ’Hare’, ‘Krishna’ and ’Rama’ symbolising God and made popular by the Hare Krishna Movement.

Many people in the West prefer to make up their own mantra and there is no reason why one should not do this. Spiritually speaking, as the aim of meditation is to realise your natural connection to the root of all things, your own personal mantra is perfectly valid so long as you choose this with a sense of connectedness in mind. Names and words that evoke peace, oneness and spiritual union are most appropriate.

How you choose to then recite your mantra is up to you. You may wish to experiment and take into consideration the different effects that different forms of meditation have. Repeating a mantra out loud and feeling the vibrations is a very tangible way of feeling your connectedness with the Universe, whilst writing a mantra has a more scholarly feel to it and is liable to invoke more of an intellectual analysis of spirituality, and so on.