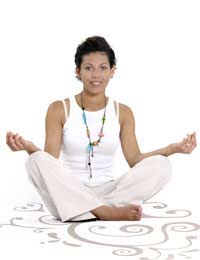 Meditation has many health benefits and can help improve upon one's physical, mental and emotional wellbeing. Despite its spiritual connections, western science has identified ways in which meditation can help to alleviate stress and combat ailments.

From the point of view of Western medicine emotional and spiritual wellbeing both come under the remit of mental wellbeing, as emotional states and spiritual impressions are believed to arise from chemical interactions in the brain. Conversely, spiritual believers would argue that both emotional and mental wellbeing for under the remit of the spiritual (see related article: Why Meditate?). For this reason the western medical approach to meditation differs only really from the spiritual approach in the system of thought used to explain its effects: the essence of meditation remains the same.

Scientifically, it is felt proven that meditation operates on brain functions in such a way as to balance the right and left cortex of the human brain. The left cortex is responsible for logical thought, whilst the right cortex is responsible for creative and emotional thought. An imbalance between these two 'sides' of thinking can result in imbalanced behaviour, making both work and leisure difficult to deal with.

Additionally, the release of chemicals in the brain appropriate to 'fighting' or 'fleeing' situations (the ' fight or flight mechanism), the suppression of which can lead to a build up of stress and anxiety, is slowed and halted as the 'parasympathetic' nervous system takes over. This system helps to lower blood pressure, relieve muscle tension and regulate breathing, contributing to a calmer way of being.

Western science increasingly treats the mind and body as interlinked in a way that Eastern spiritual systems have since their inception thousands of years ago. Stress is thought to be a major cause of heart disease, respiratory problems and cancer, whilst relaxation can contribute to the successful treatment of these conditions. Headaches, cancer, heart disease, chronic pain and PMT are all believed to be benefited by meditation.

Focus upon an area of the body that is suffering an ailment is believed to be able to relieve pain/discomfort in that area, whilst focusing on areas of wellbeing (skin complexion, energy levels etcetera) can significantly improve upon those specific aspects. This may be accompanied by a mantra or affirmation to reinforce your desire to lead a healthier lifestyle.

In a similar way, it is also possible to tackle addiction: The key here is to be easy on yourself. Rather than repeating the mantra: 'I will not smoke, I will not smoke, and I will not smoke (and on and on…), start with the friendlier and realistic mantra; 'I am a healthy and energetic person and all is good in my world' (though feel free to make up your own). By repeating a positive affirmation such as this you are taking direct action in mentally envisioning yourself as you wish to be - the rest will naturally follow.

Meditation is considered, beyond a doubt, by Western medicinal practitioners to be of benefit to general health and wellbeing and of use in the treatment of mental and physical ailments. It is also widely agreed that meditation can be of use even if you do not consider yourself to be 'ill'. The regular practice of meditation will help to prevent you from becoming run down in the future whilst making for better clarity of thought and judgment in the present.