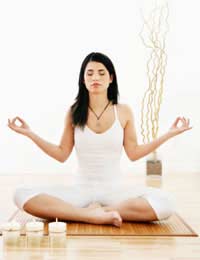 There are numerous guidelines and regulations, prohibitions and injunctions on what you may or may not eat prior to meditation prayer or similar spiritual activity. Some govern what you eat (with some religions banning meat or certain meat products altogether, and others banning certain products for a given period before prayer or for a portion of the year or period of the day during that portion of the year).

Of the three main Judaeo-Christian religions all observe some kind of fast, such as Christian lent and the Muslim Ramadan. These fasts are undertaken to demonstrate a dedication to God and a regime of prayer id adhered to during the fasting period.

Catholics also abstain from food and drink for one hour before taking holy communion or from midnight if they are very strict, whilst other religions follow similar, and often stricter, observances before ritual.

Eastern mystics (encompassing the Yogic as well as Buddhist and Taoist paths) as well as Christian mystic traditions also have fasts, some of which are very harsh, and often have a host of rules governing diets besides these fasts. In the case of many religious and spiritual groups, as well as in the case of practising individuals the choice is made to follow a vegetarian or even vegan diet to demonstrate a oneness with nature and a compassion for all life.

It is broadly believed by many spiritual practitioners that a good diet will improve your experience of meditation by helping you to maintain a clean and ethically sound body and mind. In light of many of the beliefs followed by various religious groups it is easy to see why vegetarianism is favoured no less than why pacifism and respect for others is favoured. Injunctions such as those governing certain types of meat (Jews not eating Pork, for example, and Hindu’s not eating Beef) are sometimes harder to place, but can be often put down to the dangers of eating those meats in hot climates where the religions were founded, as with pork. Some argue, however, that prohibitions such that which Mohammed issued regarding the eating of Pork in the Koran are sufficient purely because they are the word of, for example, Allah. The Hindu prohibition on eating beef accords with their belief in the sacredness of the Cow – something in which you can either believe or not.

A Diet for You

It is important whether you meditate or not to choose the right diet for you. If you are most comfortable eating meat, for example, then it will not enhance your meditation to give it up, unless you are party to a specific practising religion which forbids eating meat.

The main thing to consider with regard to meditation, or prayer, and your diet is that you are comfortable during your spiritual practice. This will often entail refraining from a heavy meal just prior to beginning your prayer or meditation session. Only if you feel that refraining from eating might be to the detriment of your session (i.e. if you are very hungry or if you are feeling frail) is it a good idea to eat something.

Given that meditation often aims to effect a feeling of oneness with the practitioners surroundings and compassion for others it is not perhaps best practice to eat food from unethical sources. The decision as to what those sources are has to be down to the individual, but mass produced food is often considered impure for a variety of social and political reasons, as well as for reasons related to the manufacture of those foods.

Ideally, given the hectic pace of modern life it seems to make best sense for many people to meditate before breakfast, after a light breakfast, or an hour or two after an evening meal. You will gradually find your own routine with which to work around work and meals and one which best suits your dietary needs and ethical stance.

For may it will be a case of ascertaining whether your diet interferes with your ability to clear your mind and focus either on your mantra, counting of breaths or devotion to God, or whether it enhances this experience.