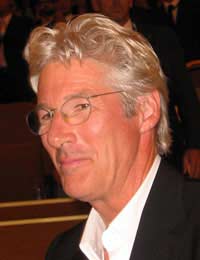 Thinking of taking up meditation? Well, you’re in good company. Not only do thousands of people around the world engage in this activity but many celebrities too! So if you’re looking for a little celebrity inspiration to start your meditation journey, check out the famous meditators below:

Perhaps one of the most well-known celebrities to champion the importance of inner peace and mental awareness, Richard Gere is also the well-known heart-throb of many Hollywood hits such as Pretty Woman and Chicago. A devout Buddhist and passionate advocate for human rights, Richard Gere meditates daily, claiming that it helps him set his motivation for the day.

A supermodel may not be the first person that springs to mind when you think of someone meditating but this Brazilian beauty believes passionately in the practice and credits it with keeping her healthy, especially during her pregnancy with her son. It may even have helped with pain control during her natural water birth.

Still one of the most glamorous women in rock ‘n roll despite being in her sixties, Tina Turner is famed for her unique voice, her fantastic legs and her long career dating back to 1960. However, what she is less well-known for is her Buddhist beliefs and her regular practice of meditation. It was this which gave her the strength to leave her abusive marriage to Ike Turner in the 1970’s, turning her into an icon for abused women everywhere. Tina even famously chanted a Buddhist meditation mantra during a live chat show. Furthermore, all of Tina’s meditation practices are self-taught as she did not have the freedom to follow her Buddhist beliefs openly but she credits meditation with changing her life.

Another “music great”- Herbie Hancock is a jazz household name and open of the most revered contributors to modern jazz, often having collaborated with the legendary Miles Davis. Herbie practises a form of meditation with a heavy emphasis on chanting. He turned to meditation after seeing its affect on the performing abilities of fellow jazz players and believes that it has played an integral part in his own artistic development. He credits meditation as enabling him to explore outside his comfort zone and find the courage to try new things.

A relative newcomer to meditation, Gwyneth Paltrow is nevertheless already a big believer in the practice having heard great things about it from friends who have been long-time practitioners of meditation. Gwyneth is particularly keen to achieve the awareness, peace and inner contentment that can only be gained from meditation.

The first image that comes to mind when you hear Steven Seagal’s name is the action-movie hero charging around, carrying massive guns, amid huge explosions – as far away as remotely possible from quiet meditation! But in fact, Steven Seagal has had a long history of meditation, since moving to Japan at the age of 17 to study acupuncture, martial arts and Zen, and spending 15 years in that country. He once said that he has been doing serious meditation in his “own pititful way” for about twenty-seven years.

As the “King of Gloom”, Canadian singer-songwriter Leonard Cohen seems to symbolise all that is about despair and misery. However, Leonard Cohen is in fact very familiar with “inner contentment” – at least, that achieved through the practice of meditation! He credits meditation with helping him overcome a long term drug problem and even – to his surprise - dispel the gloom that had pervaded his life. He once said that he was pleasantly surprised to find that when he meditated, he was overtaken with a sense of repose but the change was so gradual that he didn’t realise or believe it was happening for a long time!

This handsome star of films like ‘Lord of the Rings’ and ‘Pirates of the Carribean’ credits meditation and the philosophies behind it as helping him keep away from the self-destructive path that is so common in Hollywood. He follows a practical approach to meditation and incorporating meditation into his daily life so that it strengthens him, as well as helping him find peace.

So if you’re looking for inspiration, you could do worse than to follow the footsteps of these celebrities who have all found meditation to help enormously in their eventful lives.