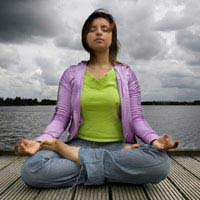 Za'Zen (which is often translated as 'seated meditation') is the Zen Buddhist practice of seated meditation. In keeping with Zen practice in general, the aim of Za'Zen is not to reach a mystical state of mind far beyond our everyday experience, but rather to merely clear the mind and reach a state of relaxation. In doing this it is possible to live in the moment and reach a state of Zen enlightenment or 'Satori'.

Za-Zen concentration (or breathing) practice is traditionally fairly rigid, with a small number of positions that may be adopted, all of which require some concerted effort initially from the Za-Zen practitioner. These positions are:

Burmese: Legs crossed with both feet and knees resting flat on the floor. To keep your self supported, you can sit on a small cushion (or 'Zafu'). This position is the easiest of the four and the novice will find it relatively easy to support themselves once the position has been initially held.

Half Lotus: In the Half Lotus position one's left foot is placed upon their right thigh, with their right foot tucked under their left thigh. Again, you can sit upon a 'Zafu'.

Lotus: Sitting upon a Zafu, place you right foot upon your left thigh, and your left foot upon your right thigh. Although this position might seem difficult to hold initially, its symmetry offers considerable stability, which is important for maintaining focus.

Seiza: Sit kneeling, sitting upon the heels of your feet, or upon a specially designed 'Seiza' bench.

All of the above positions are chosen for their practicality; they all offer ease of breathing, whilst being positions that hold up well, with minimum effort once the practitioner is comfortable with them.

For Zen Buddhists there is nothing mystical or otherworldly about the Za-Zen positions, even though they resemble yogic positions that sometimes claim otherworldly affiliations. For this reason, the contemporary western practitioner may wish to practice Za-Zen sitting upright in a chair, with their lower back supported by a small cushion, or by simply lying down. From here it is possible to still attain the main benefits of Za-Zen concentration practice, before trying one of the other three main Za-Zen techniques.

Concentration on Breathing (often in one of the above positions) is the most commonly used Za-Zen practice and is undertaken in order to cut out superfluous thoughts and to focus one's mind upon the moment. Focusing upon the breath, and either visualising it rising from just below the navel, or by repeatedly counting it (often in cycles of ten) intense concentration can be built up. This is sometimes practiced as a means to finding 'Satori', although it is often preliminary to one or both of the next stages.

Koan Introspection is the concentrated meditation upon a Koan. A Koan is a story, dialogue or question given by a Zen Master to a student. In pondering upon the answer or nature of a Koan the student learns that there are no 'right' or 'wrong' answers.

The Koan's themselves are often specifically formulated so as to make only an irrational answer viable. Many Koan's point to the validity of experience over reflection or rationalisation, thus encouraging one to live in the moment. For example the famous Koan; 'What is the sound of one hand clapping?' is best answered immediately with the physical demonstration of the sound of one hand clapping (in whatever way one deems that possible).

Alternatively (and this is commonly recorded in Zen practice) a random and nonsensical reply to the answer may be equally valid, in light of the fact that the question itself is nonsensical!

The third form of Za-Zen meditation 'Shikantaza' translates as 'just sitting' (although it must be pointed out that 'Za-Zen' itself is often translated as 'just sitting' too). The practice of Shikantaza involves the use of no specific object of meditation, instead focusing merely on the minds ability to be aware of sensation and impressions as they arise. In this way the practitioner can foster an attitude towards life conducive to experiencing 'Satori'. No specific position need be adopted for these last two Za-Zen practices.