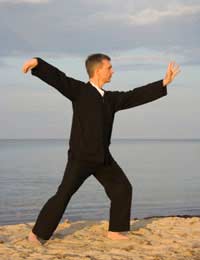 ‘T’ai Chi’ and ‘Chi Kung’ are two popular forms of movement meditation originating in China that are widely practised in the West. The older of the two forms ‘Chi Kung’ (dating back as far as the 18th Century B.C.) translates roughly as ‘breathing exercise’ (chi translating as both breath and energy) and is based around a series of slow fluid movements which are performed slowly and follow on seamlessly from one another.

T’ai Chi (which traces its history back to the early 19th Century) is a similar exercise which aims at balancing both active (Ying) and passive energies (Yang) within the body and the wider Universe in an activity that is practiced both as meditation as a form of martial art.

Both T’ai Chi and Chi Kung have huge worldwide followings and are used in the West principally for their relaxation properties. Whilst both are traceable at points of their history to Taoism this is not something that is felt by many people to be fundamental to their practice

Chi Kung is a relatively complex form of breathing and movement based meditation requiring patience from the practitioner. Many Western forms of Chi Kung tuition have come under criticism for not emphasising this aspect. The practice of Chi Kung traditionally argue many orthodox practitioners takes years to master under the supervision of a master. However, even in China, Chi Kung is practiced widely as a health maintenance exercise and it is not maintained that one need practice for years in order to reap its benefits, which are similar to those offered by meditation, yet more physically far reaching due to the physical nature of its exercises.

T’ai Chi, or ‘T’ai Chi Ch’uan’ as it is often called is undoubtedly massively indebted to Chi Kung, although it emphasises its use as a martial art in a way that Chi Kung doesn’t even though Chi Kung is often used alongside the practice of martial arts as a means of focusing and calming the mind.

T’ai Chi aims principally to develop the student to a point where they can perform all its movements, that have been practiced slowly and without impact in a fighting environment. However, it must be pointed out that the aim of T’ai Chi is not to meet violence with violence, but rather to deflect an enemy’s blows through the simple subconscious practice of the movements rehearsed during active meditation. In this way a fundamental point is demonstrated, aiming to illustrate the interconnectedness of the passive forces of Ying and Yang.

T’ai Chi training is undertaken in stages, the first aiming towards the promotion of good health and the correct mental attitude, and second employing meditation in preparation for the final stage when T’ai Chi is developed as a martial art. In the West the focus is primarily on the first two stages, with few people practicing T’ai Chi as a martial art.

T’ai Chi and Chi Kung are growing steadily in popularity in the West and are seen as viable forms of meditation that can easily be practiced under the guidance of a supervisor and regularly developed from there at home.

The positive health effects of its practice are rarely disputed by Western medical practitioners although the claim that T’ai Chi and Chi Kung help to centre certain energy channels and balance Ying and Yang may meet with resistance with secular practitioners. This is, however, little reason to question its efficacy.