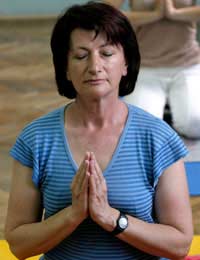 The menopause marks the end of a woman’s period cycle and is accompanied by a host of physical and psychological symptoms as well as emotional disturbances as the individual passes from one phase of her life and into another. The menopause occurs as a physiological change causing the female body to produce less of the hormone ‘Estrogen’ thus closing down the reproductive system, leading to hot flushes, poor bladder control, anxiety, depression and irritability. On top of these chemically induced changes that occur due to a change in hormone levels, there is a psychological anguish associated with the pressures of ageing in a society that values youth.

Meditation is to believe to be helpful in calming both the physiological and psychological impacts of the menopause and can help one to come to a better acceptance of such a big life change, both on its own and in conjunction with other treatments and lifestyle changes.

Aside from the symptoms detailed above other symptoms include a change in sexual drive, aching joints and palpitations and pain during sexual intercourse. These are generally symptoms that will abate over time. However, there are some more serious health risks such as osteoporosis - which causes the bones to become brittle - heart disease and weight fluctuations. Many of these more serious symptoms can be tempered or avoided completely by following a course of ‘Hormone Replacement Therapy’ (HRT), in which female hormone supplements are used to rebalance the body’s equilibrium. Though this is seen as an effective means of treating the worst effects of HRT many people seek more natural treatments, partly because HRT is associated with a slight risk in the chance of developing Breast Cancer.

Of the alternative therapies available to help one to cope with the menopause a controlled diet relaxation techniques such as yoga and meditation are two popular examples. Which form of meditation to choose is up to the individual and will depend on whether they seek spiritual development as well as a way of calming the physical and psychological effects of the menopause. Ultimately, either way, meditation is a powerful way of projecting oneself positively and of letting the moment pass. By meditating it is possible to see the menopause as just one of many changes. Although these changes are often negative, they herald a new dawn and a new stage in life in which many women actually feel more comfortable, relaxed and confident. The psychological symptoms of menopause are not permanent in themselves and living through them in an accepting way is something which can enhance your understanding of life, which is ever changing. Meditating, which involves ‘letting go’ of your self and surroundings is an ideal way of fostering this attitude.

A combination of breathing exercises, positive affirmations that reflect upon the nature of change and specific positive visualisation of the areas of your body that you wish to heal are all useful ways of meditating during the menopause. See related articles for further information on these forms of meditation.